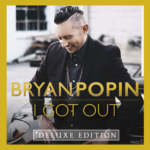 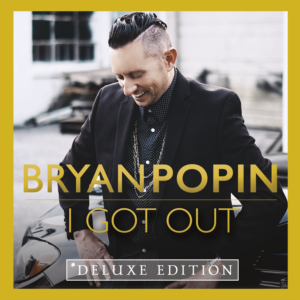 BRYAN POPIN’S NEW ALBUM “I GOT OUT” *DELUXE EDITION AVAILABLE FOR PRE-SALE NOW!

With his sophomore release, I Got Out, the classically trained pianist turned Gospel singer releases a body of work that took almost three years to complete. I Got Out was born of Popin’s reflection on “next steps” after going through a series of difficult and unexpected life challenges that could have easily shaken his faith. I Got Out isn’t merely a title for this new musical offering, it also serves as the project’s prophetic theme that Popin hopes will connect with and encourage every listener.

The title cut and new radio single “I Got Out” is a swingy congregational anthem with a contemporary edge. It features production from super-producer AyRon Lewis (Kirk Franklin, James Fortune, Bishop Paul Morton Jr.). The chart climber continues to move up, this week landing at No. 7 on Billboard’s Gospel radio chart, and is featured on Apple Music’s Gospel A List. Watch the single’s lyric video here: <http://r20.rs6.net/tn.jsp?t=lgtjvu9ab.0.0.rt6u4yjab.0&id=preview&r=3&p=https%253A%252F%252Fyoutu.be%252FxWh62E9lnL8>

I Got Out is packed with additional personal songs. “You’re Gonna Live Again (Bella’s Song)” is one of I Got Out’s most candid, contemplative tracks. It’s a soaring ballad that Popin wrote out of a time when his daughter suffered a series of bullying incidents. As a father, the accompanying frustrations of seeing her suffer and authorities deal with the incidents was extremely difficult. Popin recalls, “this song spoke to my family, my daughter and me. It reminded us that this season too will pass, that Bella would come out of this and continue to pursue her dreams.” His hope is that this song encourages listeners in the midst of overwhelming struggles in that very same way – that no matter what life has dealt them nor what someone has spoken over them…”they’re gonna live again!”

I Got Out features top notch collaborations with two of today’s most renowned gospel voices. BET Sunday Best winner Tasha Page-Lockhart joins Popin on “Beautiful Savior,” an audacious cut with a sound that goes beyond the genre. Gospel music and television superstar Tamela Mann rounds out the album with the soulful version of “Alright.”

ABOUT BRYAN POPIN:
A native of NJ, Bryan Popin was a piano protégé by his early teens. Later in his career, the legendary Stevie Wonder nicknamed him the “Little Boy Wonder” and he’s continued to impress with his songwriting, keyboard skills and vocal flow. Popin has appeared with Bishop TD Jakes numerous times and was featured at both MegaFest and Bishop Jakes’ Pastors & Leader’s Conference. He’s written with R&B legend Chaka Khan, opened for Tye Tribbett, Israel Houghton, Deitrick Haddon, Donnie McClurkin, Marvin Sapp and American Idol alum Danny Gokey. At the height of their popularity, Justin Timberlake’s *NSYNC recorded one of Popin’s songs for their multi-platinum album and stadium tour, Celebrity.